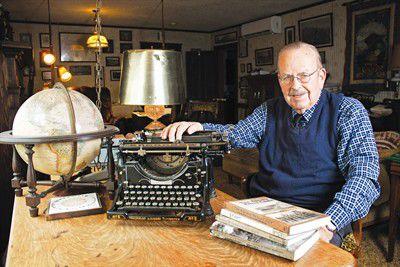 He was a long-time resident of Monmouth, retiring after many years of practice as an attorney from his office on Atwater Street. His legal acumen as a lawyer made McArthur a formidable opponent in the courtroom.

Scott was a traveler. He enjoyed visiting county fairs around the country and sampling a variety of cuisines. Cruising was also a favorite.
An early grounding in journalism helped him become a fine author, and Scott wrote several excellent books to tell the history and stories of his hometown and county. He was a regular guest speaker at the Polk County Museum and a regular contributor to the Itemizer-Observer, sharing his charming tales of “the old days.”

Scott was a member of the Masonic Lodge in Independence and held the group in high regard. Scott was also involved in the Masons’ long-standing scholarship program and their ardent support of reading activities in several area schools.

Scott McArthur’s loss will be felt long and hard by this community. We who knew him will always be proud of our friendship with him and awed by what he accomplished.’

If you share Scott’s vision of a strong and active Community Foundation, please donate to the Foundation in his memory. Your gifts are tax-deductible and will be used to help fulfill Scott’s vision of providing scholarships to Central High School seniors.

MICF
PO Box 84
Monmouth, OR 97361
Please designate the fund on the memo line of your check.

Or Donate on Paypal – Click Donate Today!
To designate funds in your Paypal donation, select “add special instructions to the seller.”